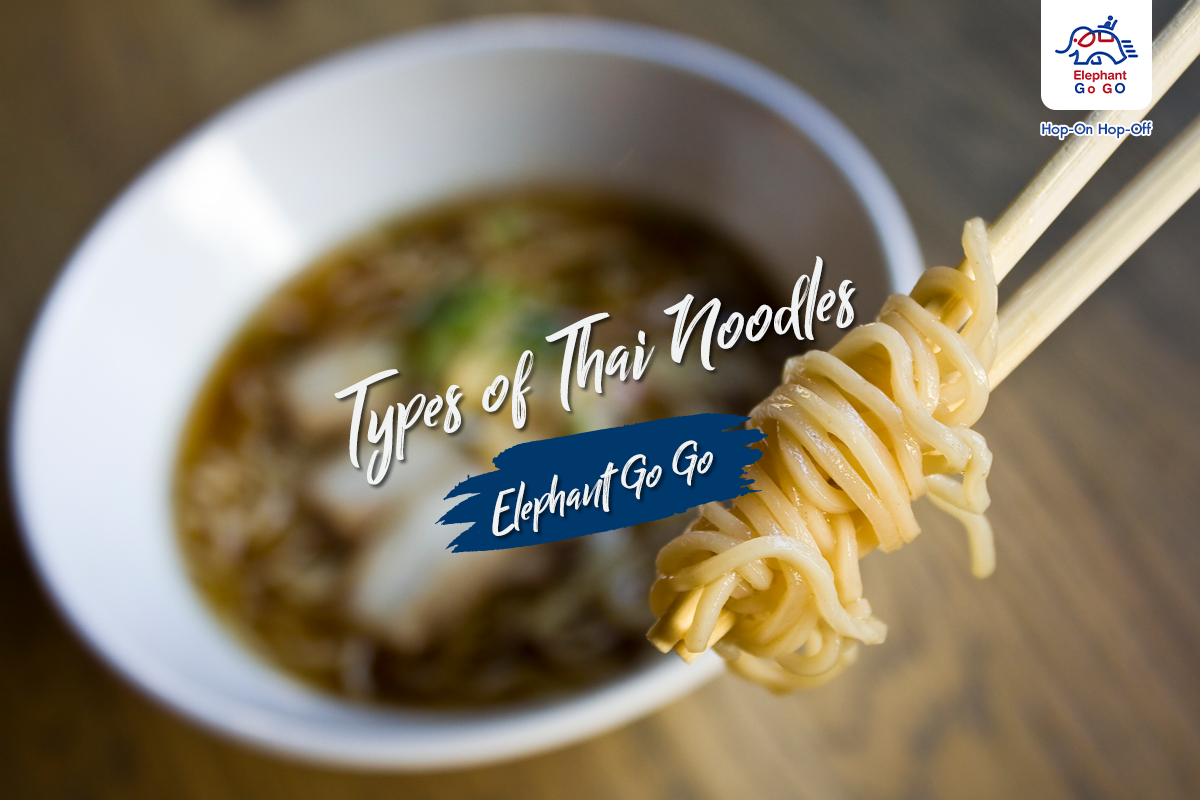 Although rice is known as the staple of Thai food, you will also find noodles in almost every corner of Thailand. Noodles were originally brought in by the Chinese but today, they have become one of the most common dishes in Thailand. Noodle dishes are quick, satisfying and fulfilling, making them the de facto fast food dishes in Thai cuisine. 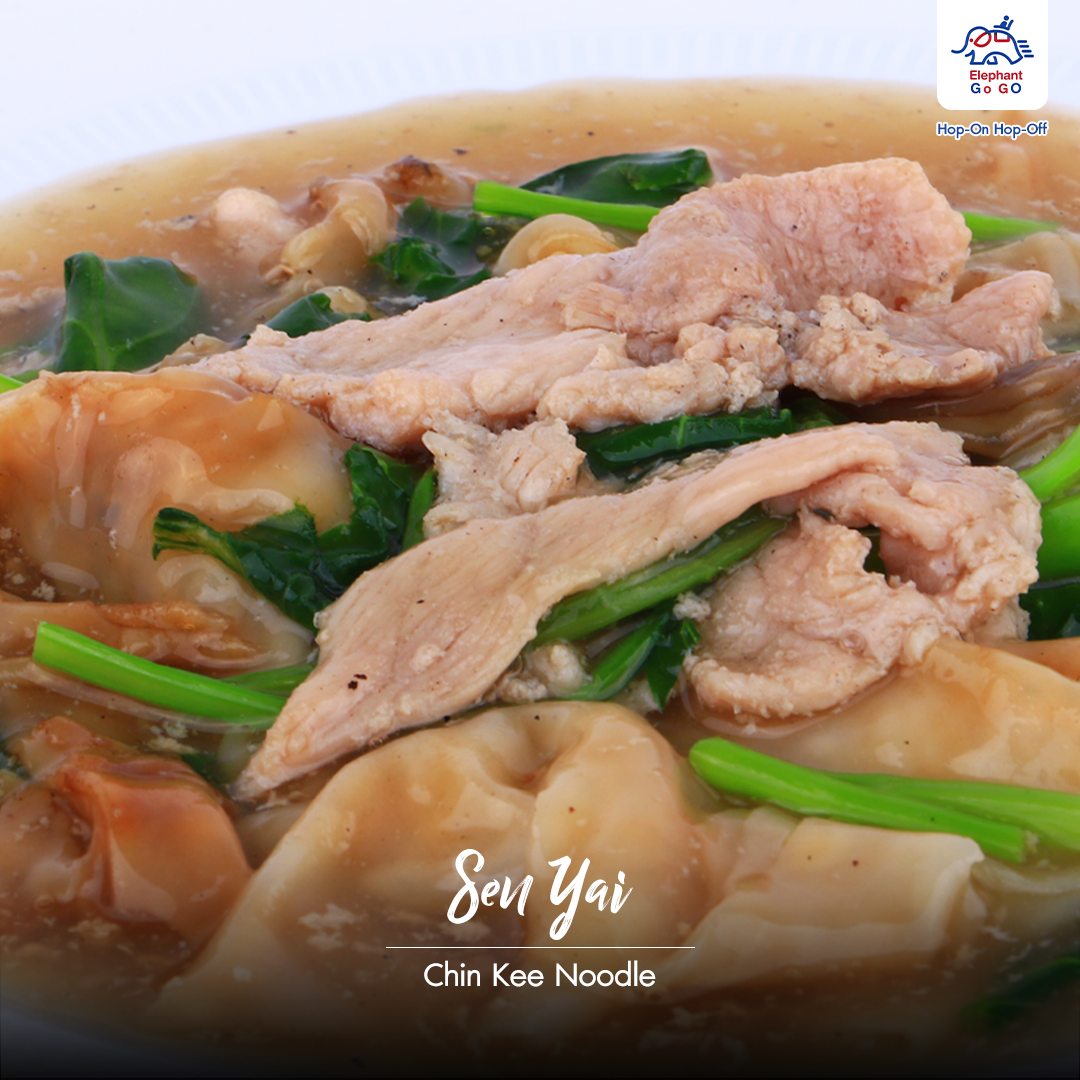 Sen Yai are wide flat noodles made from white rice and is the largest noodle among all. Oil is used to coat Sen Yai to prevent them from sticking. Hence, Sen Yai noodles are typically used in dishes that require the noodles to be stir fried.

The best dish to try Sen Yai is Rat Na. The noodles are first stir fried and then topped with meat and vegetable gravy. Elephant Go Go recommends you to try this dish at Rat Na Chin Kee. The restaurant has been around for more than 80 years and what sets it apart is the additional ham and fried egg that are added to the gravy.  Rat Na here is a delicacy and not to be missed. 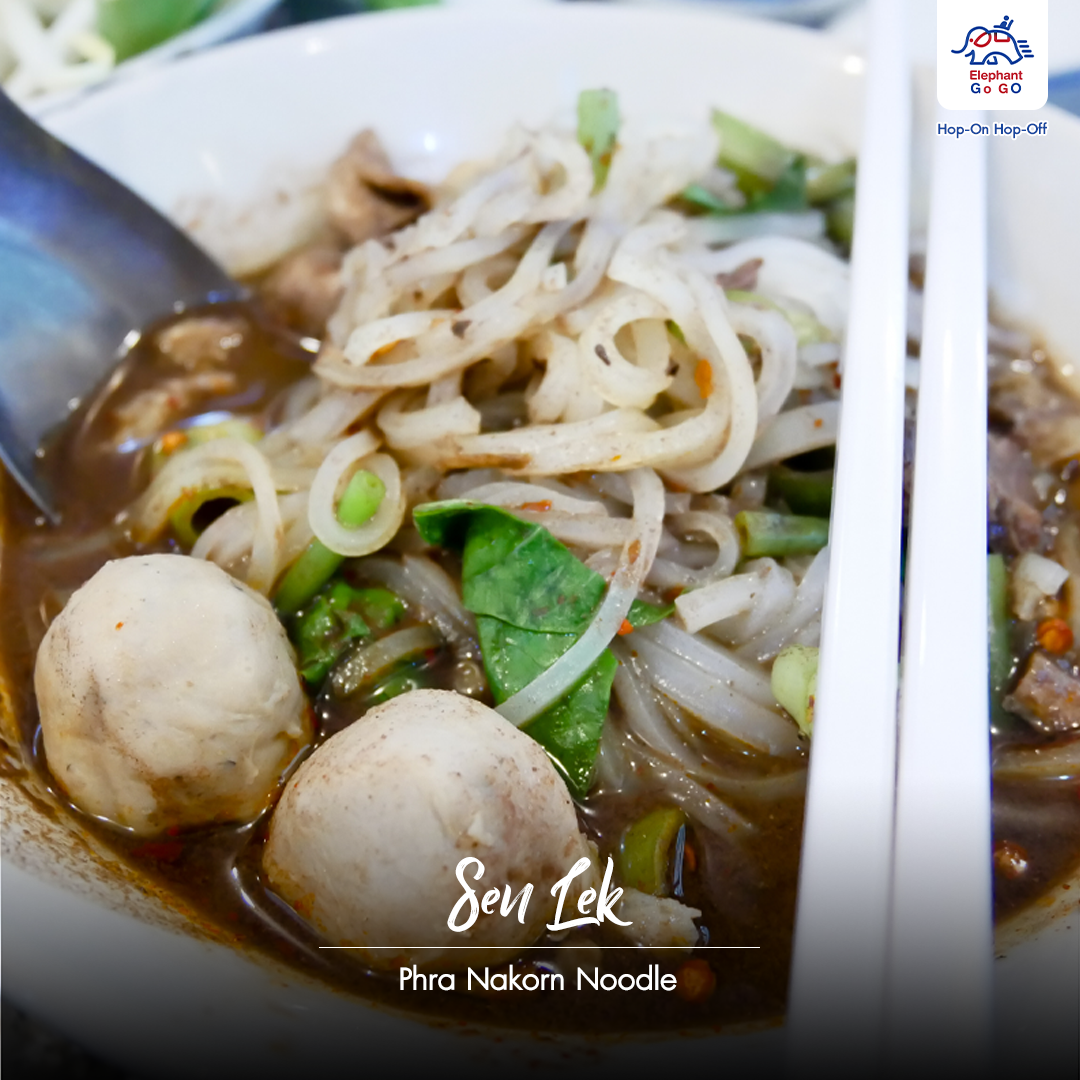 Sen Lek is a popular noodle type and is available at most restaurants in Thailand.

If you are looking for an affordable and delicious bowl of Sen Lek noodles, head to Phra Nakorn Boat Noodle at Victory Monument. The portions here are smaller than usual and so is the price. The appropriate way to eat Thai boat noodles is to order multiple bowls or as many as required until you are full! It is a fun and fulfilling experience. 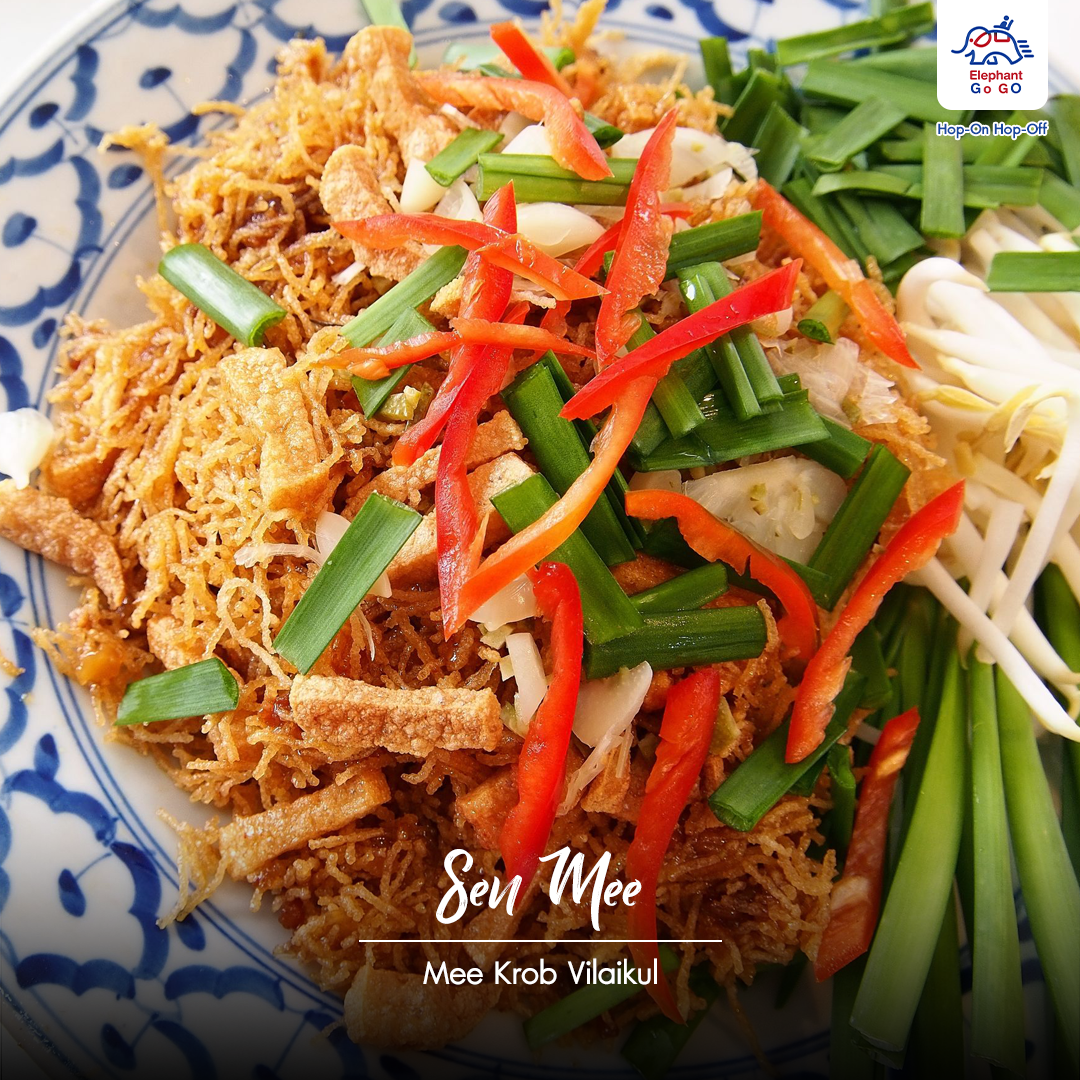 Sen Mee is the thinnest amongst the white rice noodle types and the shape is similar to Woon Sen or Vermicelli. Sen Mee is popular for soup noodle and stir fry.

The menu that Elephant Go Go wants to recommend is not the usual soup noodle but it is a deep fried noodle or Mee Krob. Mee Krob is an ancient recipe that is not easy to find as it takes quite an effort to make one. In the old days, Mee Krob was often served as a snack in between meals or as an accompaniment to main dishes.

The best place to try Mee Krob is at Mee Krob Wilaikul. The restaurant is easily accessible via Elephant Go Go and the recipes have been passed down through generations. The decor is traditional Thai and will take you back to the bygone era of old world charms. 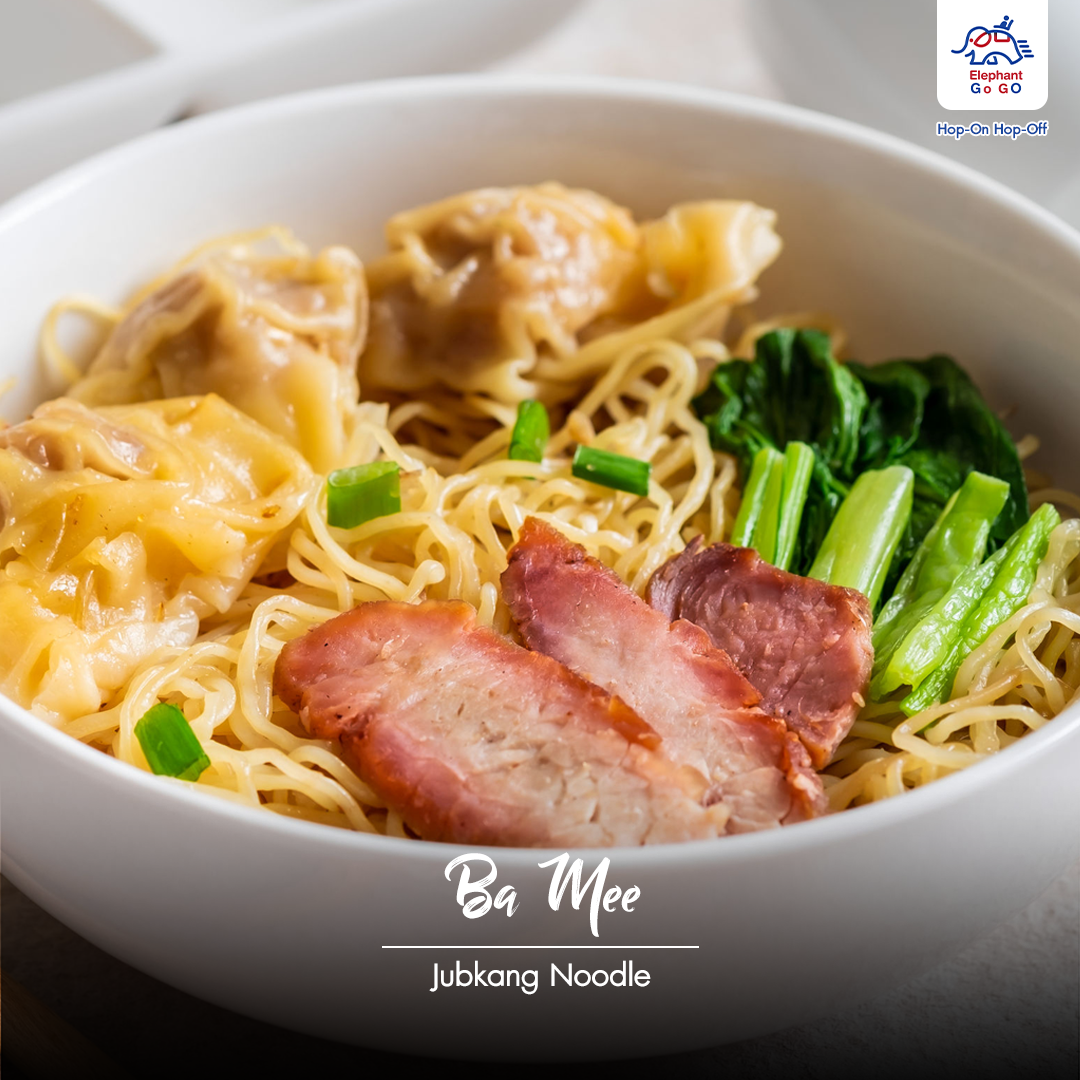 Ba Mee, brought in by the Chinese, has been around in Thailand for a long time. Ba Mee is made from wheat flour, mixed with egg, giving it the unique bright yellow colour. 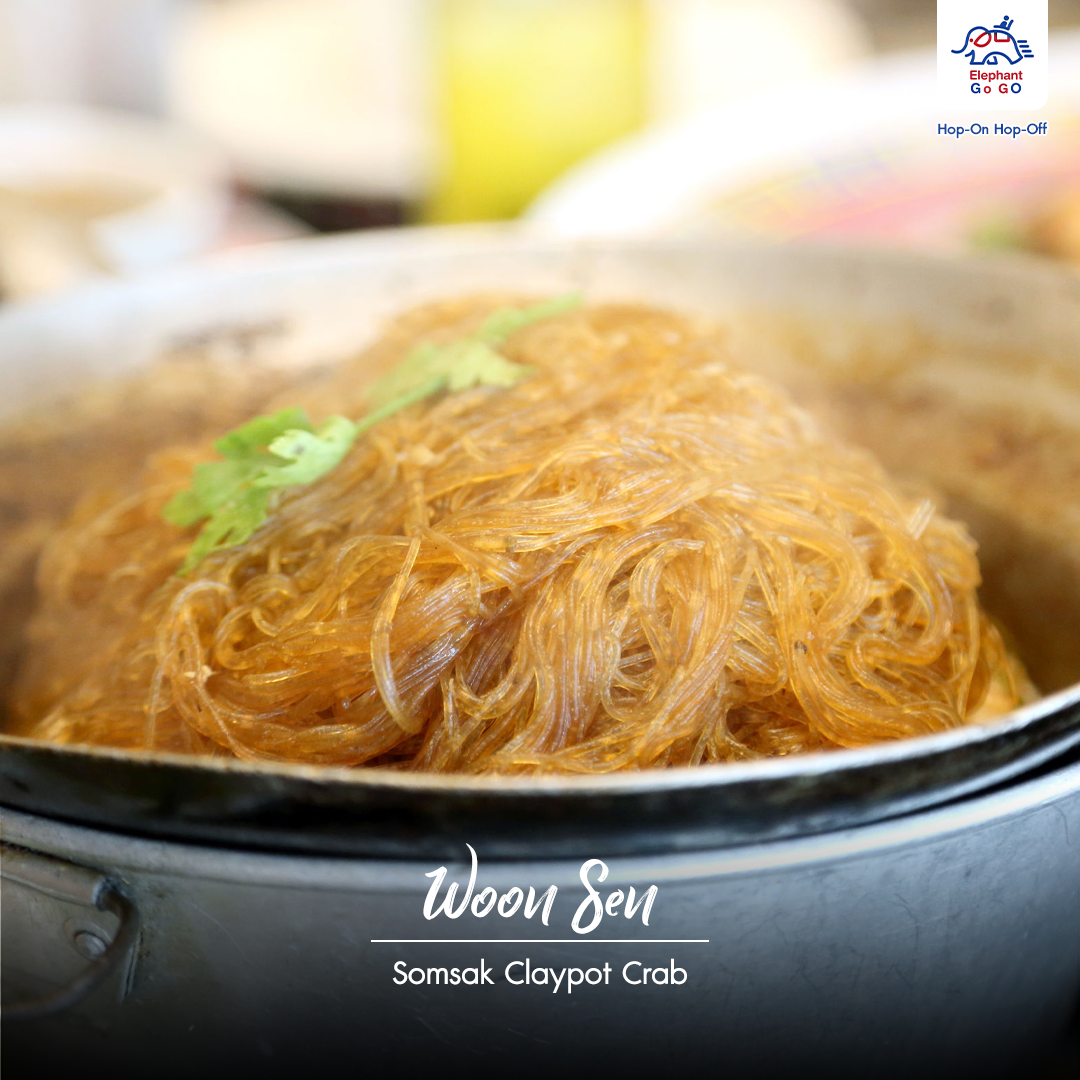 This transparent and sticky noodle is made from Mung bean flour. Woon Sen is thinner than Sen Lek and Ba Mee and is similar to Sen Mee. Woon Sen is typically used in curry or roast dishes.

If you want to sample flavorful and tasty Woon Sen, Elephant Go Go recommends oven roasted woon sen at Somsak Claypot Crab restaurant. The speciality here is the Woon Sen in Claypot Crab, where fresh ocean crabs and woon seen are cooked in a claypot with aromatic herbs and spices. You can also opt for prawns if you are not a fan of crabs. 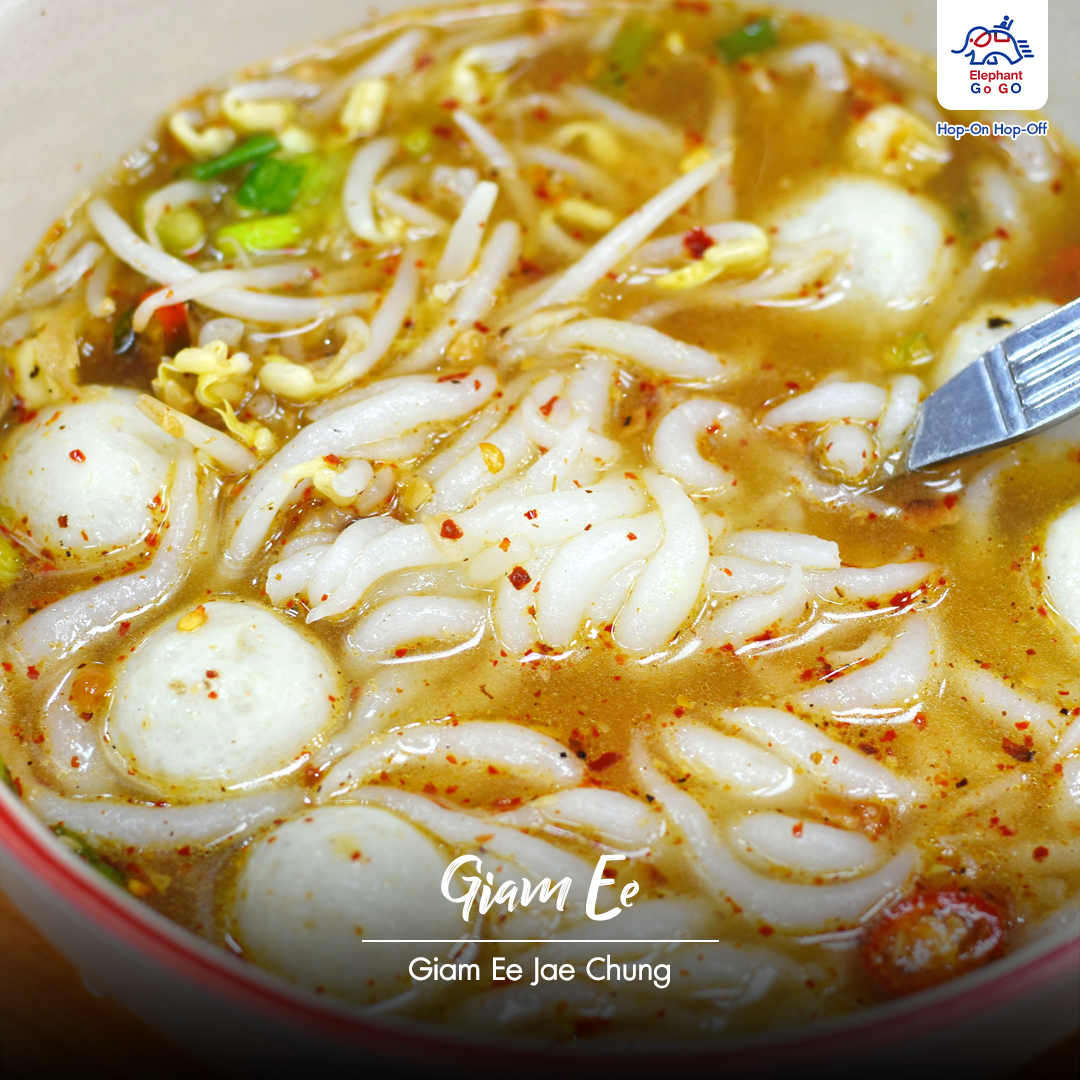 Giam Ee is a type of white rice flour noodle but with a shorter and fatter shape. Giam Ee is typically eaten in soup containing minced pork, boiled crispy squid and other pork offals.

Giam Ee is becoming more and more difficult to find. One of the most traditional and authentic restaurants to try this dish at is Giam Ee Jae Chung.  Easily accessible via Elephant Go Go Bus, Giam Ee Jae Chung has been serving hot bowls of Giam Ee for more than 30 years. 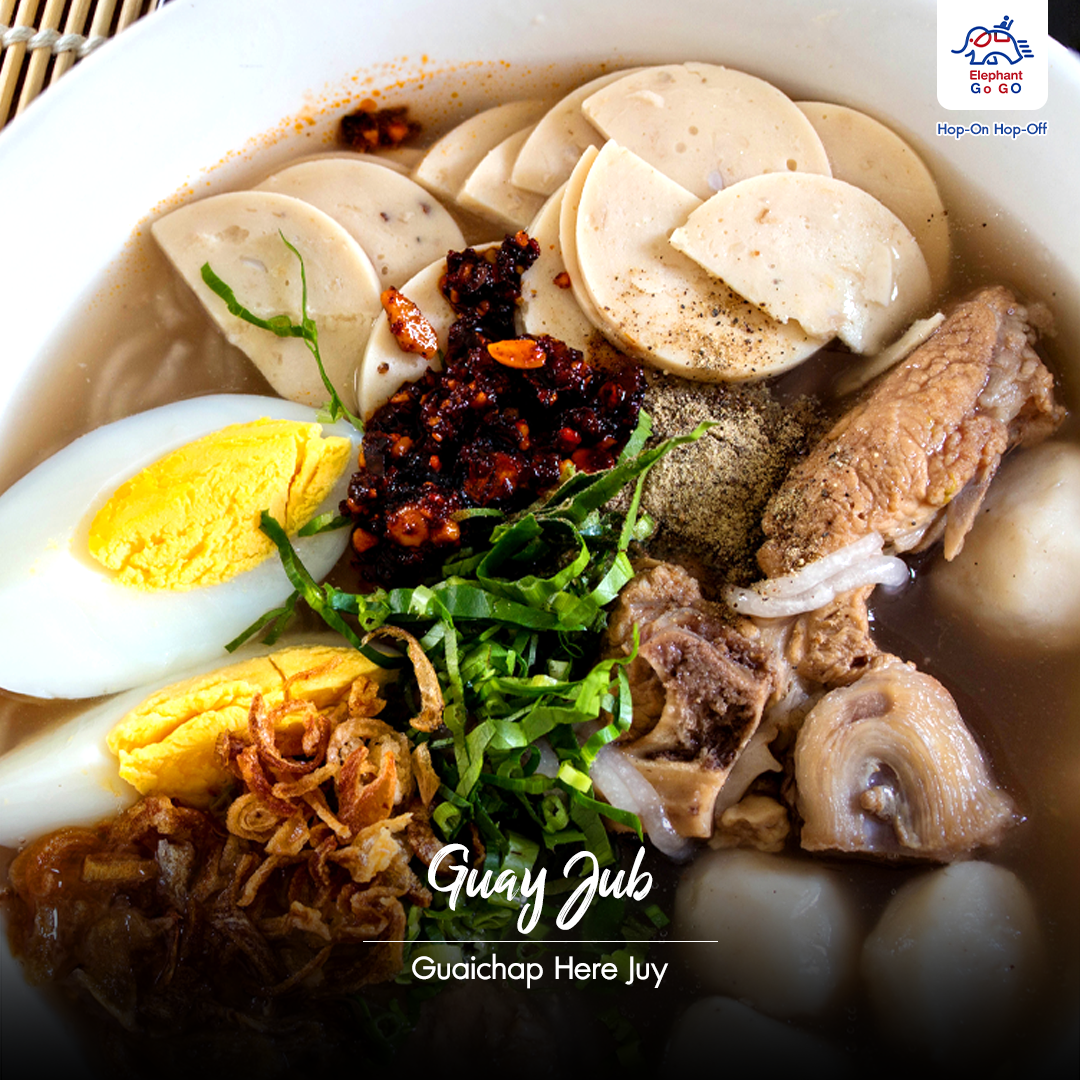 Guay Jub is a large flat noodle sheet, made from white rice or glutinous rice flour. The large sheet is cut into bite-size triangles or squares before cooking. Guay Jub is usually served in a soup called Palo or stewed pork soup. When the small flat sheets are cooked, they curl cup to resemble a cylinder. This dish is typically called “Guay Jub” (same as the noodle type).

The best place to try Guay Jub on Elephant Go Go’s list is Guay Jub Here Juy in Sampeng area. The specialty here is the thick soup, rich with herbs and spices. The noodles are cooked to the right consistency. A bowl of perfection is waiting to be savoured by you! 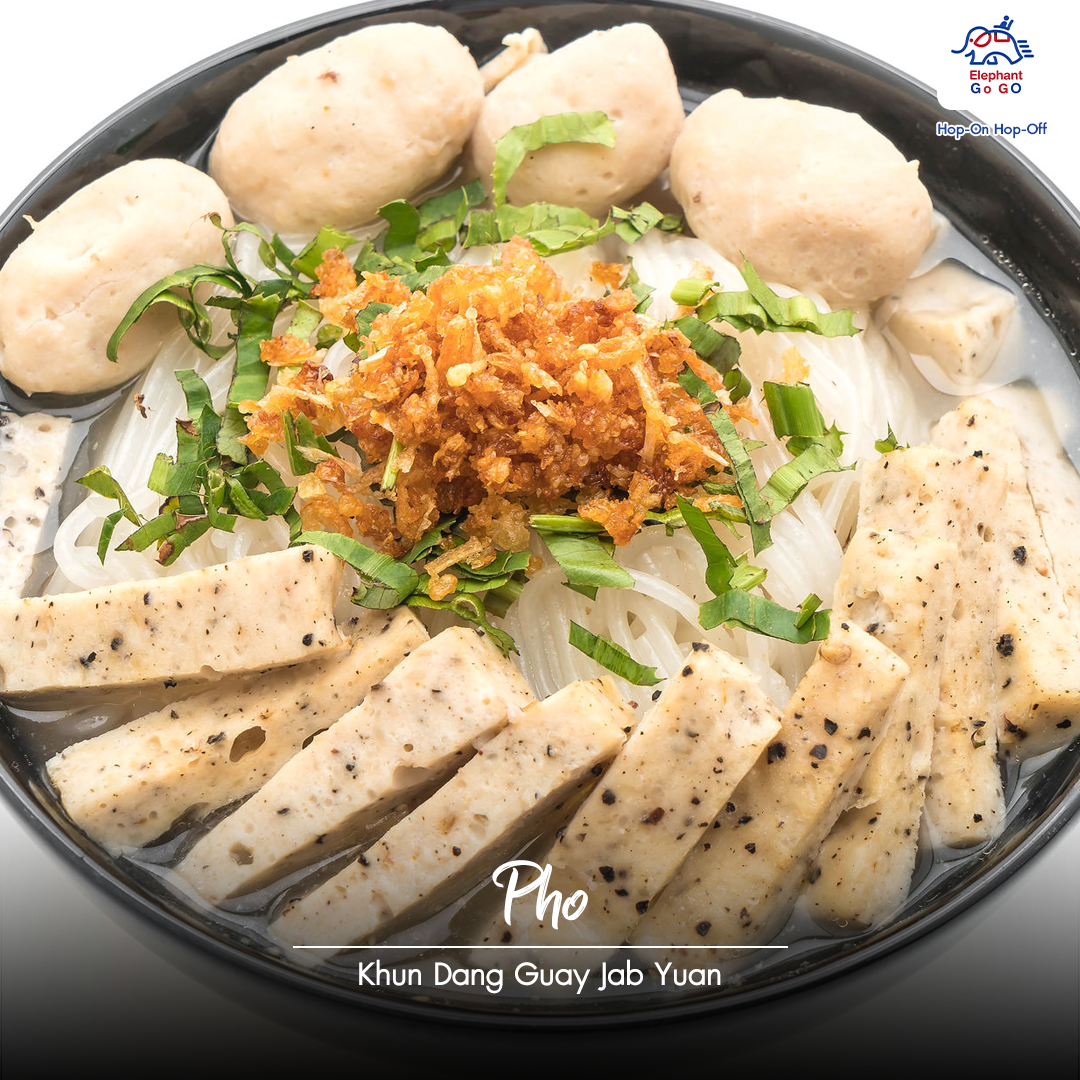 Pho is a type of noodle from Vietnam which has gained popularity in Thailand. Pho noodles are similar to Sen Lek but the shape is rounder and the texture is more similar to Woon Sen.  Pho soup is similar to other noodle soups found in Thailand but Pho is accompanied by fresh vegetables.

While you’re sightseeing Bangkok with Elephant Go Go, stop by for a bowl of Pho at Khun Dang Guay Jab Yuan. Pho here has been flavored to Thai likings and there is a variety of toppings to choose from. The restaurant is open for both lunch and dinner. 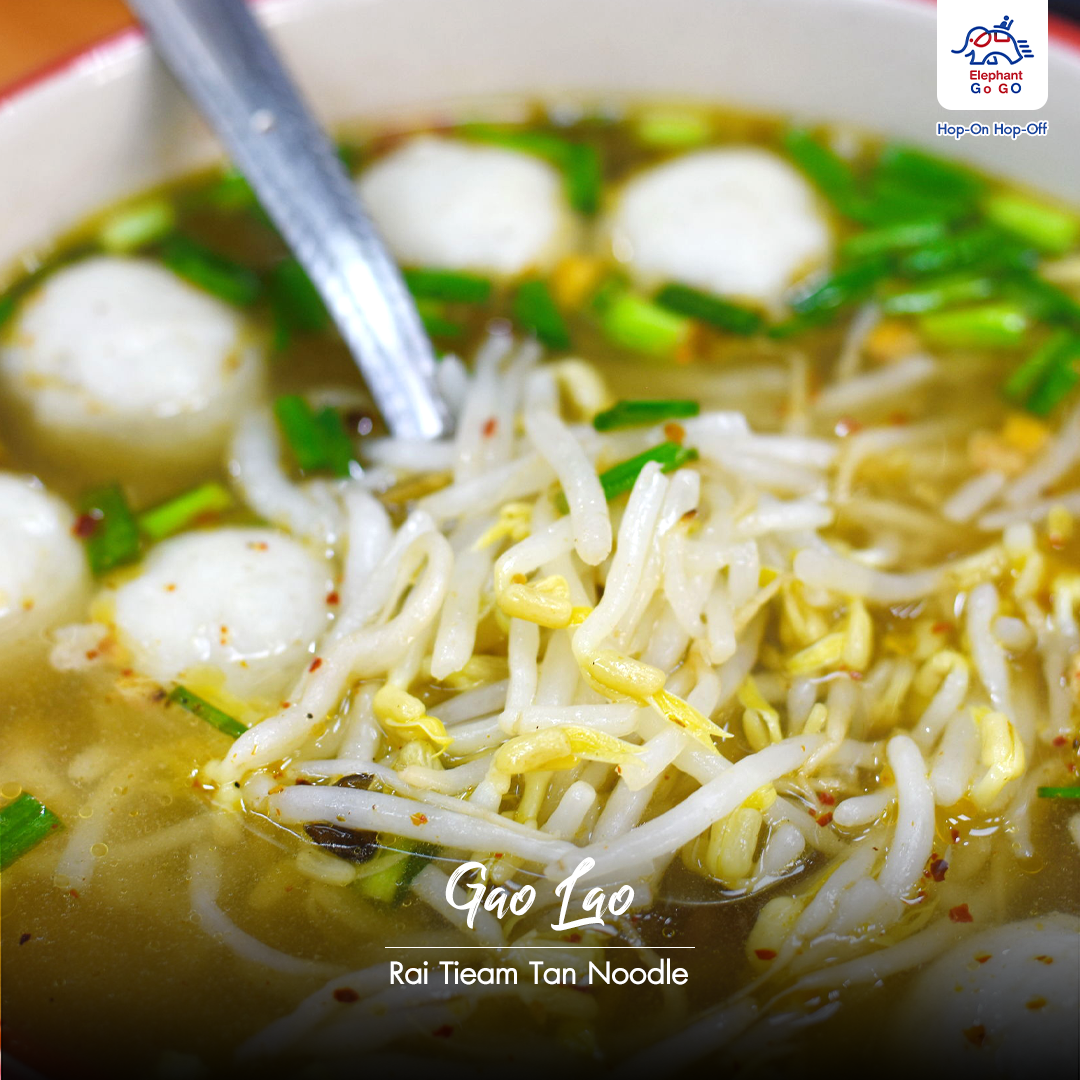 As you have seen from the earlier part of this post that there is a large variety of noodle type to choose from, when ordering noodle dishes in Thailand.  However, you can also order noodle dishes without any noodles and this particular dish is called Gao Lao.

Gao Lao has the same condiments and toppings as normal noodle dishes but it is served with rice, instead of noodles.

Gao Lao normally comes in a bowl but in some restaurants, such as Rai Tiem Tan Noodle, Gao Lao is served in a flaming hot pot, allowing the soup to remain hot for the entire duration of the meal.